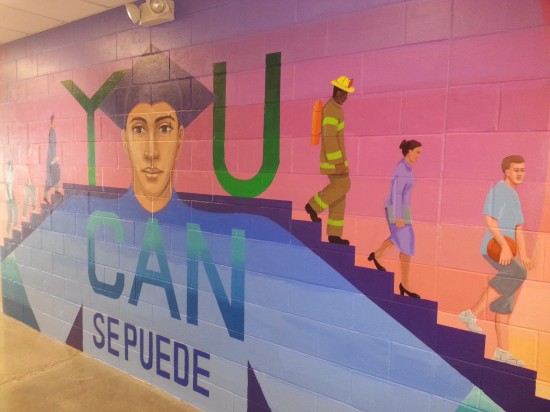 The Cochise County Juvenile Detention Center (JDC) in Sierra Vista, AZ is participating in a nationwide arts program called the ‘Emanuel Project’. The motivational arts program offers a compelling mural project to provide youth in detention a unique hands-on opportunity to work with the nationally renowned painter, sculptor and muralist Emanuel Martinez, as he paints a 144-foot mural specially designed to enhance the Cochise County JDC.

“This program makes a powerful impact to improve the lives of detained youth like those at Cochise County JDC by helping students strengthen their communication skills, build self-esteem and bolster academic performance through a mural process,” said Emanuel Project Program Founder Louisa Craft Jornayvaz.  Known for her work as an advocate for at-risk youth, Jornayvaz says the Emanuel mural project is supported with art curriculum and art therapy programs, as well as research to help document the program’s impact among committed youth.

“This is a tremendous gift for the youth here at our facility,” said Pat Schmitt, Division Director at the Cochise County JDC. “It’s not only a great opportunity for our students to learn about the mural process, but even more, it’s an honor for our students to work with Emanuel Martinez who is a great mentor and accomplished artist,” he added.

Artist Emanuel Martinez began his own artistic career at age thirteen as a youth-at-risk at the facility for juvenile offenders where he painted his first mural. Two years later, after being detained three times and winning statewide art competitions, Martinez established his reputation as an exceptionally talented artist.

With help from artist Bill Longley, Emanuel re-enrolled and graduated from school, winning two art scholarships. By age twenty-two, Emanuel had worked with the most significant muralist in the world, David A. Siqueros, completing three art works now part of the permanent collection of the National Museum of American Art Smithsonian Institution in Washington, D.C.

Youth at Cochise County JDC began working side by side with Emanuel Martinez on Oct. 7 on a 9 x 16 foot mural titled “You Can (Se Puede).” The mural depicts the importance of education and the many choices young people will encounter during their lives.

As muralist, painter and sculptor, Emanuel occupies outstanding status among national and internationally known artists. Since establishing a studio in 1968, Martinez has received national acclaim as a forerunner of the contemporary mural movement in the U.S.  He has received prestigious awards for his design capabilities and for engaging young people in art projects requiring high standards of

“Delcy Scull, our director of juvenile court services, and I are thrilled to be part of the Emanuel Project and grateful to the supporters of this innovative program,” said Schmitt. “It incorporates art into our education curriculum to reach youth who may not respond to traditional teaching methods. It helps engage them in academics and facilitates success in the classroom. Many of our youth have previously benefitted from this mural program,” he added.

The Emanuel Project will continue at the facility through October with the Emanuel Project Curriculum Director Jeanne Wines-Reed. Ms. Reed will provide training to faculty and staff at the Cochise County JDC to help them incorporate art into the daily curriculum.

Since the Emanuel Project began in January 2011, thirty-one murals have been completed in twenty juvenile detention centers in California, Colorado, Georgia, Indiana, Kentucky, New Mexico, Tennessee, and Texas. A total of 21,079 square feet of murals have been painted in total.

The Cochise County JDC was built in 2001 and houses both male and females. The facility provides foundation and exploratory programs that challenge and enhance the youth for assimilation back into the community while keeping our communities safe.