Here are pictures and concept thoughts for the new mural “Education = Positive Transformation” done this summer by Emanuel and the youth at Crescent Leadership Academy in New Orleans! 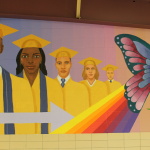 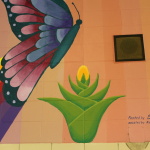 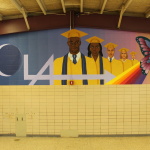 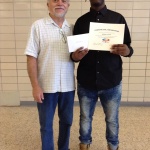 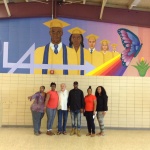 “To the staff and students at the Crscent Leadership Academy

The concept below is a sketch of what I envision for the cafeteris mural at the Crescent Leadership Academy in New Orleans. This was on based on how I interpret the mission and vision of this academy.From left to right will be a crescent moon against a dark background that lightens has it moves to the right. This crescent symbol forms a “C” followed by a “L” and an “A” that is an abreviation for “ Crescent Leadership Academy. The “L” moves forward into an arrow to emphasize Leadership. The “A” uplift’s the dominant graduate’s arm who is holding his diploma and who repesents a leader. Following behind Him are more graduates in a proud formation. The arrow points to a beautiful butterfly, a symbol of transformation used in most cultures. The colorful butterfly will leave behind rays of color to represent it’s influence on the world. As a symbol of growth and health, a plant emerges into flowering bud.”

Submitted by: Emanuel Martinez, director of the mural component of the Emanuel Project.